Beyonce Knowles has revealed she is pregnant with twins!

The 35-year-old posed in just a bra and underwear with her bump on show in an Instagram snap posted on Wednesday.

She added a caption which read: ‘We would like to share our love and happiness. We have been blessed two times over. We are incredibly grateful that our family will be growing by two, and we thank you for your well wishes. – The Carters.’

In the ethereal frame, she wore a veil on over her face while surrounded by flowers. 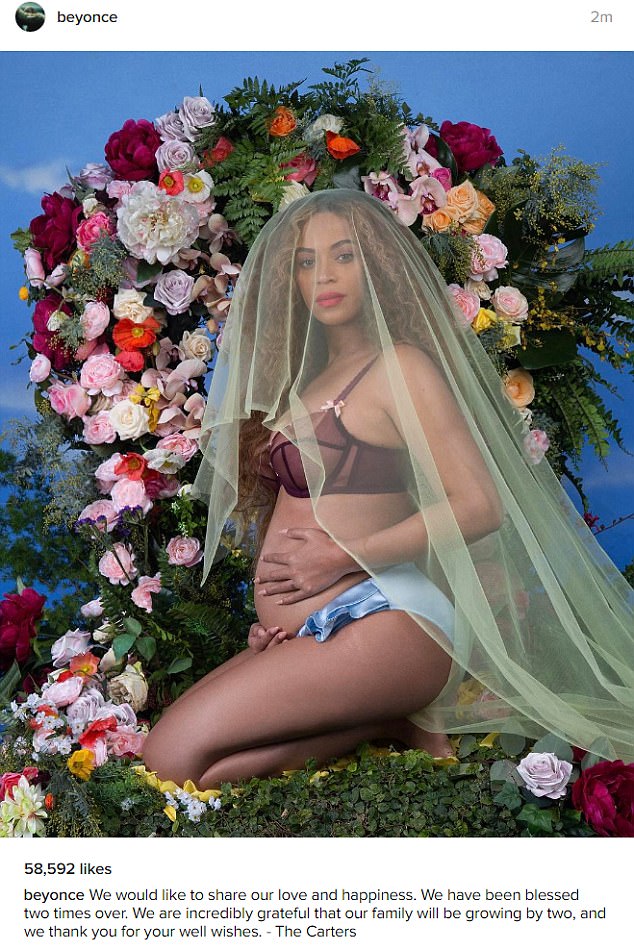 Double joy! Beyonce revealed she is pregnant with twins with a message to fans on Instagram on Wednesday. She put her bump on show while wearing just lingerie and a veil

Rihanna, Rita Ora and Brie Larson were among the celebrities to congratulate the family over social media.

The Single Ladies singer, who has kept out of the spotlight in recent months, and rapper husband Jay-Z are already parents to five-year-old Blue Ivy.

In 2013, Beyonce revealed she had suffered a miscarriage prior to the arrival of her daughter.

She said at the time: ‘About two years ago, I was pregnant for the first time. And I heard the heartbeat, which was the most beautiful music I ever heard in my life.

‘I picked out names. I envisioned what my child would look like. I was feeling very maternal.

The singer was last pictured on stage with Jay-Z on November 4 while performing at a fundraiser for Democratic U.S. presidential candidate Hillary Clinton

‘I flew back to New York to get my check up – and no heartbeat. Literally the week before I went to the doctor, everything was fine, but there was no heartbeat.

WILL BEYONCE STILL PERFORM AT COACHELLA?

Beyonce, who is believed to be between four and five months along, is scheduled to headline Coachella in April.

Bosses at AEG Live, who produce the event, were not aware of her pregnancy, according to TMZ.

The site claims it is unclear if she will even perform at the popular desert festival in Indio, California, but one source insists: ‘The show will go on.’

Congratulations to the couple